The intention of my work lay in the artistic sonification of purely technical and graphic representations, which were created by chance. The interpreter should be a human being. The abstract technical-graphic representation about the way of the human being again to the technical-auditive representation. The abstraction and complexity demand interpretation through improvisation and free the interpreter from musicality, tonality, language, and time. The configuration of the analog synthesizer with random generators and haptic sensors maps the errors and chaos in the creation of the reference, destroying perfectionism and forcing freedom in improvisation.

The closest this work comes to the current state is, for example, Earle Brown’s Abstract Visual Reference in his piece “December 1952.”

These parameters form the requirements for the functionality of the instrument to be chosen. My choice fell on a system of analog sound synthesis, consisting of a medium modular system and 2 analog desktop synthesizers. 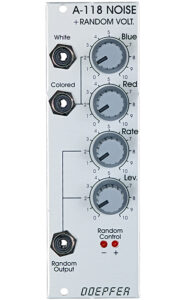 The “white” output carries the white noise as expected. The “colored” socket outputs the colored noise whose timbre is determined by the “Blue” and “Red” potentiometers. Blue emphasizes the high frequencies and Red the low ones.

The random generator emits a fluctuating random voltage. It’s rate of change and level are set with the according potentiometers. But also the Red and Blue controls affect the random signal’s deflection. Especially at high Red setting extreme values are reached. Two LEDs display amount of deflection into positive or negative range. 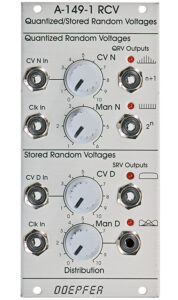 This module is based on the legendary Buchla 265 / 266 Source of Uncertainty and is a exceedingly complex random voltage generator. On the one hand it provides quantised random voltages with voltage controllable amplitude (or: amount of possible random voltages) and on the other hand random signals with 256 possible states whose probability and distribution can be set manually or per control voltage.

The A-149-2 is connected internally to the A-149-1 and generates eight random gate signals in the rhythm of the clock at the Clk-In of the Quantised Random Voltage section. The active gate outputs are displayed by LEDs.
A possible application might be random envelope triggering or other rhythmic random applications. 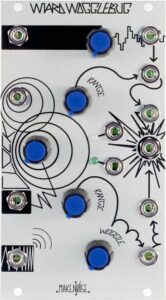 The “WoggleBug” is a random voltage generator, originally designed by Grant Richter of Wiard Synthesizers. The Wogglebug’s purpose is to overtake the control voltages produced by your keyboard during performance and to give voice to your synthesizer’s ID. It is your synthesizer’s ID MONSTER. A continuation of the “smooth” and “stepped” fluctuating random voltage sources pioneered by Don Buchla, the core of the circuit is based on the Buchla Model 265 “Source of Uncertainty” module, which many consider to be the most musical of all random voltage generators. Like the 256, the Wogglebug utilizes a vactrol based low frequency smoothing filter, VCO, and Sample & Hold to produce Stepped and Smooth (or lagged, slewed) control voltages in the range of 0 to 10 volts. 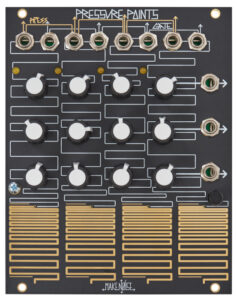 Pressure Points is a controller in which one of four sets of each three tuned voltages are selected by touching the corresponding printed copper wire at the bottom of the instrument. Touching Pressure Points, you become part of the circuit. In addition to the tuned voltages, a gate signal (Gate OUT) and a control voltage proportional to the amount of pressure applied (Press OUT), are generated when the module is touched. Up to 4 of these modules may be chained together to create controllers of varying size and complexity. Each of the Gate and Press OUTS are normalized to their respective SUM BUS which is output at the last Gate and Press OUT in the Chain.

Two potentiometers allow the circuit to be adjusted for desired playing response. One is an internal trimmer which may be adjusted to compensate for size of your fingers and moisture of your skin. The other is adjustable from the front-side of the module, and sets overall system sensitivity. 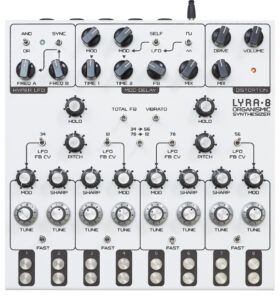 The Lyra-8 is a performance-oriented, fully analog drone synthesizer with a very organic sound. The instrument features eight oscillators, which can be used separately or stacked to FM voices. For further sound design, there are the Hyper LFO, a superbly sounding Mod Delay, and a beefy distortion circuit. Thanks to touch surfaces, the Lyra-8 can be played expressively. – A unique, very inspiring musical instrument.

Neumes (Greek νεῦμα neuma, English ‘wave’) are graphic signs, figures, and symbols used since the 9th century to notate the melodic shape and desired interpretation of Gregorian chant. Occasionally they are also used for writing down secular and religious melodies outside the liturgy. They are usually placed above the text.

“Water” by John Cage, uses a combination of time to a pictographic notation as an instruction. It marks how and when to perform certain actions.

The work is considered a key work within New Music and became famous primarily through its use in the film “2001: A Space Odyssey”.

“In Atmosphères, I tried to overcome the structural compositional thinking that replaced the motivic thematic one and thereby realize a new conception of form. In this musical form there are no events, but only states; no contours and figures, but only the unpopulated, imaginary musical space; and the timbres, the actual carriers of the form, become – detached from the musical figures – intrinsic values.”

Gesang der Jünglinge im Feuerofen, usually also officially referred to simply as Gesang der Jünglinge, is a central early work by composer Karl-Heinz Stockhausen. The work was significant for the development of electronic music. It was written in 1955-1956 in the Studio for Electronic Music at West German Radio in Cologne. It was realized together with Gottfried Michael Koenig and premiered in Cologne on May 30, 1056. The 5-channel composition lasts 13 minutes. The vocal parts were sung by the twelve-year-old Josef Protschka.

Pithoprakta (1955-56) is a piece by Ioannis Xenakis for string orchestra (with 46 separate solo parts), two trombones, xylophone, and woodblock premiered in Munich in March 1957 by conductor Hermann Scherchen. A typical performance of the piece lasts at about 10 minutes.

This refers to Jacob Bernoulli’s law of large numbers, which states that as a random event occurs, the average result approaches a certain end.

“…to create graphic situations whose effects would include the performer’s response as a factor leading to several “characteristic” realizations of the piece as an audible event: … to extend and amplify the ambiguity inherent in any graphic representation, and possible reactions to it by composer, performer, and audience; a work and each individual performance of it as a “process” rather than as static and conclusive.“ 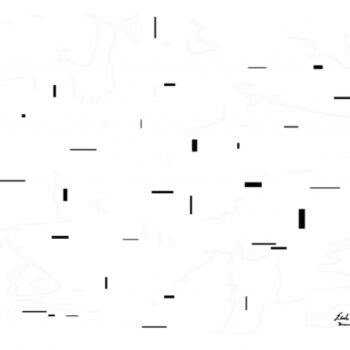 Media production within the project so far 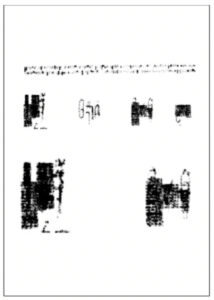 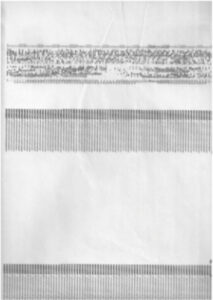 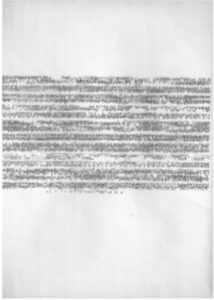 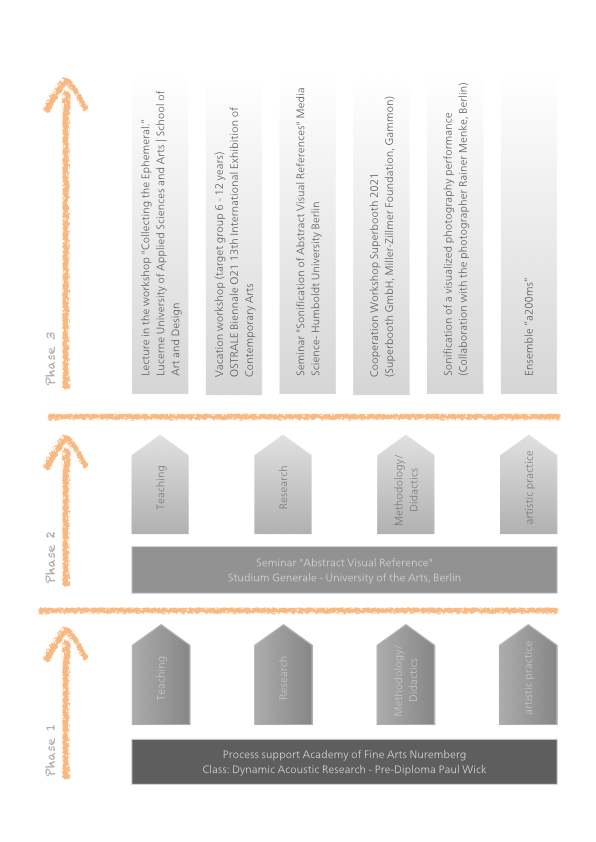 What happens when the “private,” “intimate,” “unique” of childhood encounters people in public space who do not belong to the family from which the “family photos” come, where there are neither shared memories nor a common frame of reference? What happens to the images when they are stripped of family myths and interpretations, naked and usually just photographs? What remains of the “magic of childhood”? What happens when new views and perspectives are brought into play by the viewing visitors? How do they see “the father”, “the mother”, “the siblings”? What role does the political background play – nine years after the end of the war: Nazis, Holocaust, war, the relationship between man and man, education, homosexuality, etc.? What if this is visible in the photos? 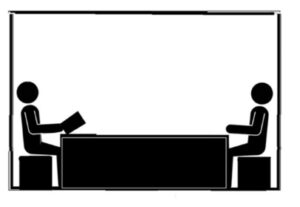 “I show you my photo album ”

I would like to show people who come to the exhibition my family photo album in a special installation. Face to Face.
Setup/construction:
Wooden wall about 250 to 300 cm long and 210cm high. Fixed to it a table about 50 x 150cm, on it two small reading lamps. Two benches. It would be nice if everything would be compact, as if from one piece or would work.
In front of the visitor is my private family photo album, he/she can now browse through it, ask questions, and/or tell something about the pictures, people, situations. There are no guidelines, no pre-structured narrative catalog, or the like. Everything is open. 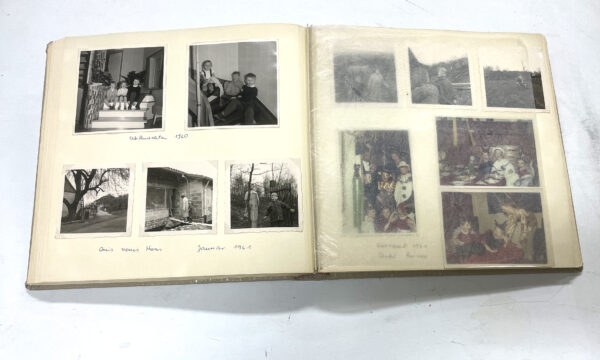 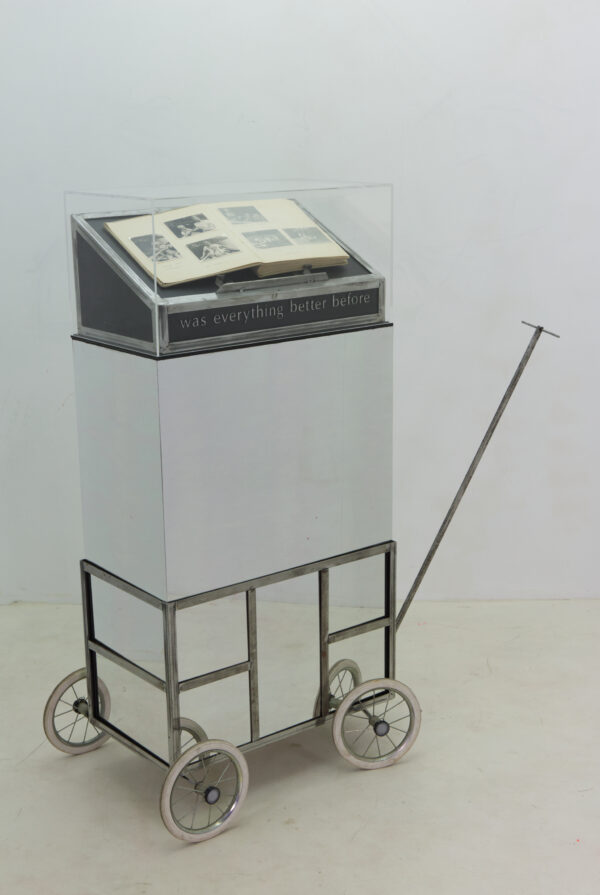 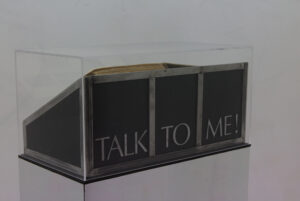 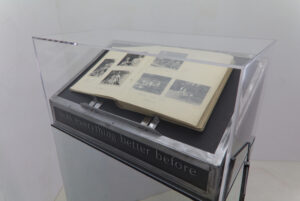 metal welded, metal mirror, baby carriage wheels, writing (Optima) made of metal letters: “TALK TO ME!” “was everything better before”

On a handcart is shown the photo album created by R. Menke’s mother in the 1950s with his children’s photos.
The handcart is welded and has baby carriage wheels from the 1950s. The body is faced with metal mirrors. Axle, drawbar. Welded attachment as a stand/support for the photo album. When not performing with the handcart, an attached plexiglass hood protects the photo album. The handcart becomes a sculpture, a showcase.
Two letterings “TALK TO ME!” and “was everything better before”. Typeface: “Optima” (typeface developed in the 50s) Lasered, metallic shiny letters on blackened metal plates.

“was better everything before“

“Everything was better before!” was the battle cry of my parents, especially regarding morals, behavior, and politics. Already as an older child, even more so as a teenager, the saying always had something reactionary and provocative, was taken here by my parents, so I understood that at least, reference to the not long ago “III. Reich” – and there had been nothing at all “better”! On the contrary! In the sentence “In former times everything was better!” also always the other, millionfold said sentence resonated: “But everything was not bad! It must be added: “But everything was not bad in the III Reich!” The creed. Justification, collective formula, chanted down ad nauseam.

The sequence of performance 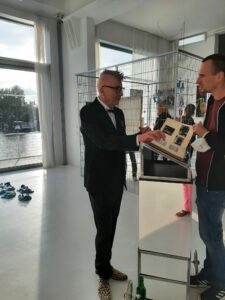 R. Menke moves with the handcart through the exhibition rooms and the outdoor facilities, addresses visitors, lets himself be addressed. The visitors can flip through the pages of the album, ask questions, comment, tell stories.