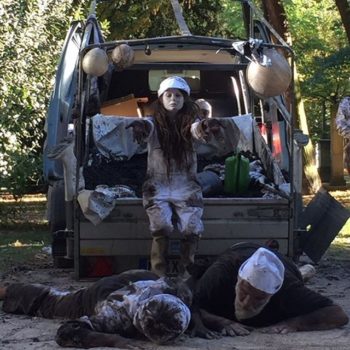 In a contemporary-performative version of the dance of death, which usually shows death as a visual and allegorical representation, with people
of all ages and regardless of status, Phonoschrank and Thomas drive
Zip over the southern part of the cemetery. They are followed by a number of uniforms
Performers whose actions remain puzzling.
The representation, which emerged in the 14th century and shows the influence of the
Death and its power over human life should take hold
of the two artists on. The inaudible music of the two-dimensional representations gives way to the clearly audible sounds in which instead of the dancing
Death now moves the living.
The implicit criticism of social systems, traditional attitudes and the simultaneously formulated appeal for human equality also refer to the first Love Parade on July 1, 1989. The demonstration
Declared move was under the motto “Peace, joy, pancakes” that until
is valid today.